A Concert to Remember 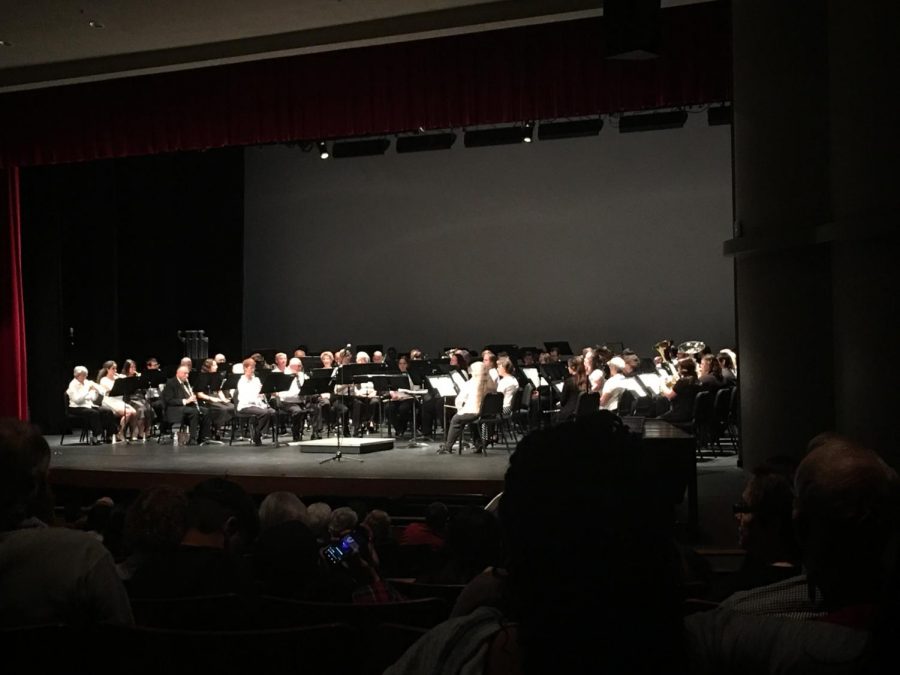 The CAC Wind Ensemble and the CAC High School Honor band performed astonishingly at the concert on Nov 21.

The CAC Pence Center before the performances began was a sight on its own. All of the seats were being filled by friends and family members of the people performing in the band. A dull roar of mixed conversations filled the auditorium, then fell to a curt stop when the members of the high school band came onto the stage.

Rick Moore, the band director at CAC, stood in front of the audience and explained that all of the musicians behind him came from 10 different high school bands from Pinal County. The directors of those students nominated them for the band, and Moore made the final selection. The high school students arrived at CAC at 9 a.m. on the morning of the concert and practiced four different pieces.

Throughout their portion of the concert, Moore introduced each song and managed to sneak in his admiration for the students. Moore asked the parents in the crowd if they remembered the first time the students brought home their instrument and made a sound on it. He went on to say that he was amazed at how far the students had come since starting in band in 5th grade.

Each of the pieces the students played sounded amazing. It was almost like they’ve been practicing the pieces for weeks, not hours. Those high schoolers were incredibly talented and deserve more than just the support of their friends, families and band directors.

The Wind Ensemble was made up of several members of the community as well as current and past students at CAC. They played six different pieces and each one of them left me wanting more.

They played a piece titled “The Witch and the Saint,” and it is without a doubt the most beautiful arrangement I have ever heard. It starts off chant-like and borderline creepy. Then the song becomes hopeful and upbeat leading to suspense. The piece slows down in the middle sounding mournful with the woodwind instruments ruling this section. When the rest of the instruments join in, they bring hope briefly back into your life before chaos and suspense fills the air.

The song kept me on my toes the entire time, I didn’t know what would happen next. It was insanely lyrical and emotional. I was a victim of goose bumps throughout the piece and was completely awestruck by the fact that so many different instruments could make such an expressive song. I recommend looking up the piece online and watching it just to experience a fraction of what went on at the concert.

The next piece was a perfect complement. It featured two CAC students, Kolby Gorham and Jacquilyn Mitchell, Moore’s wife Cathy, and a music educator David Arrott. They played marimbas up on the front of the stage. The piece was very light hearted, and it highlighted the talents of the percussionists who are usually in the back of the band unseen.

Overall the concert was very fun to attend! I will definitely attend the next one. Moore said that his band was like a family, and I can truly see that. They worked so hard together and deserve our support. If you weren’t able to make it to this concert, keep your eye out for the next one. You won’t want to miss it!