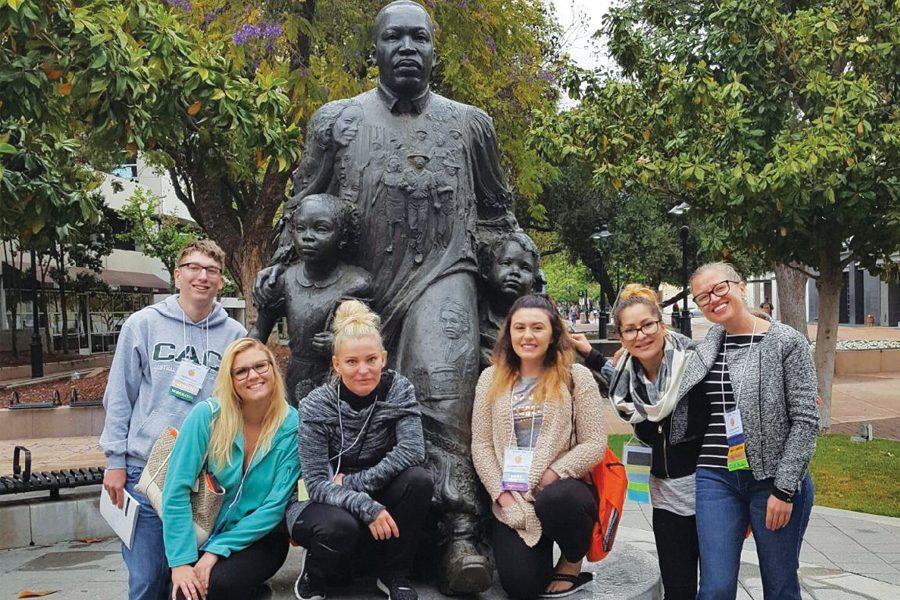 Earlier this month, I had the pleasure of attending the Western Regional Honors Conference in Riverside, California. The themes of the conference were Diversity, Innovation, and Global Citizenship. Five students from Central Arizona College presented at the conference along with CAC honors professor, Dr. Carol Johnson.

Friday afternoon the conference held a reading of Scribendi magazine, which is published by University of New Mexico. After the Scibendi reading, there was an honors reception in City Hall, which was fairly casual, and was a great way to start becoming acquainted with the other attendees.

The next day were the traditional presentations. There were three student presenters from CAC: the first to present was Jennifer Montreuil-McGowan who presented on “Skydiving Personalities According to Discipline” and showed off her breath-taking artwork. Later in the day, Olivia Jaqua presented on “Coliform Testing in Arizona’s Water Bodies” demonstrating the process of testing for E-Coli and other Coliform bacteria in Arizona’s Lakes. Last of the group, Alexander Koltz presented on “Harvesting the Web”. Dr. Carol Johnson also presented her topic; “DREAMers: Undocumented Students In Higher Education” which spurred many great conversations about the DREAMers, the conversations lasted through question time and well beyond.

Sunday morning was dedicated to poster presentations and awards. CAC had two poster presenters: Alejandra Cano who presented “Asperger’s: The Dichotomy of Interpretation, Treatment, and Diagnosis Between Mexico and the United States” analyzing the reasons as to why Mexico has a much lower rate of diagnosis for Autism than the United States, and Cassandra Holcombe who presented on “Varying Methods to Control Pet Population” demonstrating humane ways to prevent and combat pet overpopulation. After the awards ceremony and lunch, our group traveled back on Sunday afternoon.

Central Arizona College had an amazing presence at the conference. CAC was also able to provide the conference with three moderators during Saturday’s presentations. The conference provided a great opportunity for me to meet other honors students from other colleges and universities. Our group from CAC had an especially great time meeting and spending time with Dr. Lenartz and his students from Gateway Community College.

I had the chance to meet many phenomenal people from other colleges and universities and it was amazing to see all the research that has been and is being accomplished by other students and professors. Perhaps most satisfying of all was showing the western region that Arizona’s community colleges, especially CAC, are also doing some amazing and diverse work.