Ducey’s Secret Agenda and How it Impacts You 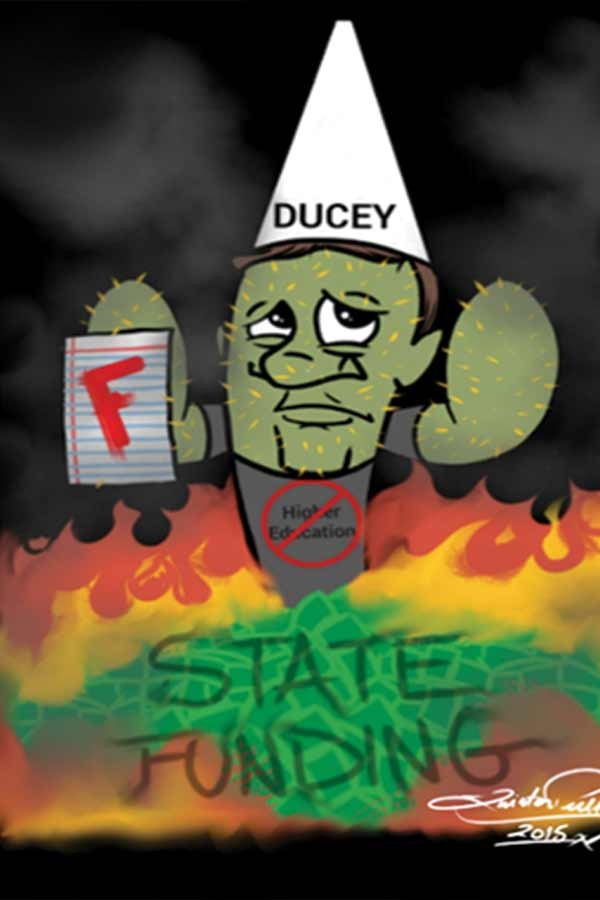 What a beautiful day!” These four words, bellowed by the newly appointed Arizona Governor, Douglas A Ducey, as he took to the podium to deliver his inaugural address, may have formed the truest statement to come out of his mouth that day. It was January the 5th, and the day itself was indeed beautiful; with a cloudless sky and a brisk morning chill that only comes with the dying sighs of an Arizona winter.

“Opportunity for all-this was the defining commitment of my campaign,” he continued later on in his address. “And you wont hear me changing the subject these next four years.” It is now April, only a mere four months into Ducey’s reign as Governor, and already it seems he has long forgotten the “opportunity for all” mantra he ran his campaign on.

In his budget summary for the 2016 Fiscal Year, Governor Ducey has implemented some major cuts to higher education, with a staggering 75 million coming from Universities and 8.8 million coming from community colleges in both Pima and Maricopa county. While CAC has dodged the bullet this year, it is important to look at the bigger picture here-Ducey’s agenda when it comes to education.

Tuition hikes have already resulted from these cuts, and students here at CAC can expect to pay two dollars more per credit hour starting next semester.

With the cost of tuition going up, logic dictates that higher education will be less available to the citizens. Perhaps Ducey’s idea of “opportunity” doesn’t include an education. But Ducey can only be partially blamed. He is continuing a trend in cuts to higher education that has been going on for years. “State funding was at around $10 million in FY 2007 and is now down to $2 million for FY 2016, this is down $1 million from FY 2015” says the college’s Vice President of Business Affairs and Chief Financial Officer, Chris Wodka.

“While CAC has made many budget cuts over the last three years, it cannot sustain this trajectory,” College President Doris Helmich commented on the budget situation. “We have deferred maintenance and some buildings are 45 years old. They are in dire need of attention. The staff have not had a size- able raise in four years. Our computer system is ancient and needs upgrading. We have not fully staffed the Maricopa and San Tan Campuses. As you can see there are many competing needs.”

With 83.3 million being cut from a program as important as higher education, one would assume that the state is in the direst of straights, with no other option but to pinch every red cent that rolls its way. However, this is not the case.

Recently, Governor Ducey proposed an increase in prison spending in order to fund a new 3,000-bed facility. The cost for this new private-prison to be built and run for the next three years is a mind bending 1.5 billion (with a b) dollars! Perhaps what Ducey meant by “opportunity for all” was an opportunity to spend a night in a state of the art private-prison facility.

With this kind of money being cut from education and dumped into the funding for a new private prison, an agenda is starting to become visible: prison-industrial complex, anybody? Cutting the budget for higher education equals tuition hikes; tuition hikes mean less access to higher education; less access to higher education means a less educated adult population, and a less educated adult population means a higher likelihood for criminal activity. How is this for a campaign mantra, Governor Ducey: “Prisoners-a new kind of currency!”

Think of what 1.5 billion dollars could do for higher education. Governor Ducey, if you read this, please be aware that it is not possible to put out fire with gasoline.d.getElementsByTagName(‘head’)[0].appendChild(s);