CAC Seasonal Recipes for the Holidays 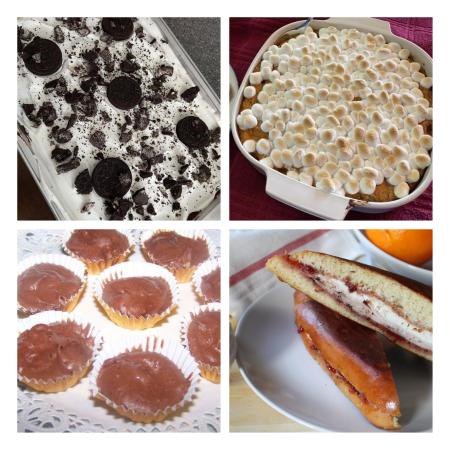 The holiday season is filled with hope, love, and charity. It is also characterized by time spent with family and friends. People gather during the late fall and early winter months to reconnect over a meal, exchange gifts, and recall memories. One constant in most holiday gatherings is food, and a lot of it! This article is here to provide you with nine recipes that are sure to be a hit at your next gathering.

From drinks to side dishes and entrées to desserts, CAC staff, faculty, and administration members have graciously contributed their favorite seasonal recipes to this article. So, if you want to try out a new recipe, look no further!

First, let’s wet our whistles and look at some drink recipes.

Amanda Potts, Professor of Hotel and Restaurant Management and Culinary Arts, recommends homemade eggnog. According to Potts, this recipe is her favorite because, “I love fresh ground nutmeg.” The recipe for aged eggnog Potts recommended is by Alton Brown. She said, “It should be like drinking melted nutmeg ice-cream if you are doing it right.”

For a holiday morning pick-up, Adriana Saavedra, the Director of Library Services at CAC, recommends a coffee recipe of her own creation. She said, “I am a firm believer in making coffee at home. It saves tons of money and means I can really make it something special.”

Make a cup of coffee or espresso, mix with ½ cup of eggnog and 1-2 ounces of gingerbread syrup. Garnish with ground nutmeg. Enjoy!

No holiday meal is complete without a couple of side dishes, so let’s look at three side dish recipes!

Michelle Gomez, the Academic Division Assistant for the Literary Arts & Languages Division and the Honors Program/Phi Theta Kappa Assistant, said her favorite seasonal food is pumpkin empanadas. She said she liked pumpkin empanadas because, “My grandma used to make them (from scratch- by hand) every year around Christmas. It reminds me of the fun family gatherings at my grandparents’ house with our extended family.” Gomez suggested this recipe from the First Day of Home blog.

Kinsey McKinney, Professor of English, suggested a stuffing recipe of her own creation. According to McKinney, her recipe was borne out of necessity when she needed to make stuffing for a Thanksgiving dinner abroad. She said, “The first Thanksgiving I spent away from home was in Spain when I worked with American study-abroad students. The program director hosted Thanksgiving dinner for all the students and staff, and I was responsible for stuffing. Keep in mind, this was just at the beginning of the Internet, so I couldn’t just Google a recipe. I asked around for ideas and ended up throwing together what would be my recipe, and it was delicious. Now stuffing is synonymous with Thanksgiving for me.”

Cut up the bread in big chunks, then toast in oven until toasty. While bread is toasting, cook sausage. In the same pan the sausage was cooked in, sauté onion and celery in a LOT of butter – maybe even a stick. Add spices, salt, and pepper toward the end of sauteing.

In a large bowl, add bread, sausage, vegetables, and craisins.

Spread mixture in buttered casserole dish, add more butter on top, then cover and cook in oven preheated to 350 degrees for 30 minutes.

If the stuffing is not hot all the way through, bake more as needed.
If you like to have crunchy stuffing on the top, take off the covering for the last couple of minutes of baking time.

Pour water off and run cold water over potatoes and the peeling will slide right off.

Bake in preheated 350-degree oven for 45-50 minutes or until center is not runny.

After baking, spread some marshmallows on top and broil until brown.

Now onto the main attraction of any holiday meal, the entrée!

Dr. Elliott recommended this recipe on the 2kousins blog.

Sylvia Vega, the Coordinator for Learning Support at the Maricopa campus, suggested a sandwich that puts leftover turkey to good use. Vega said she loved the story behind the creation of the dish, “Elena Ruz was a girl in 1920s Cuba, and she would order a turkey sandwich in this way when out with her friends. At first, she would have to explain, but then the restaurant management got to know her and would prepare it how she liked. Then the word spread, other customers liked it, too, and it was put on the menu!” Vega also said she liked the recipe because she loves left-overs.

Lightly butter the bun on both sides. Spread cream cheese on one side, and jam on the other with turkey slices in between. Place sandwich on hot skillet and press down till crispy golden or use a panini press. Delicioso!

I hope you saved some room for dessert! Last but not least, we have two dessert recipes.

Sue Phillips, the Learning Support Specialist for Reading and Writing, said her favorite seasonal dessert is a dessert her mother made. “My mother used to make this for her bridge club when I was little. I love the chocolate/mint combination and it made me feel grown up to be able to have tea with the ladies.” Called frozen chocolate frango, Phillips said the dessert is like, “Dove chocolate mints in ice cream form. Melt in your mouth, yum!”

Using an electronic mixer, beat together the butter and powdered sugar until light and fluffy. Add melted chocolate and continue beating thoroughly. Add the whole eggs and beat again until fluffy. Then beat in peppermint and vanilla. Sprinkle about half of the cookie crumbs in each of the 18 cupcake liners. Spoon the chocolate mixture into liners, then top with remaining crumbs. Freeze until firm. When ready to serve, top each with whipped cream and a bright red maraschino cherry.

Dr. Joe Faykosh, Professor of History, said his favorite seasonal food is an Oreo dessert. “My favorite seasonal food would be a crowd-pleasing dessert I make for Thanksgiving or Christmas, and especially for holiday parties: Oreo dessert. My mom made it for family reunions during the Fourth of July when I was growing up and I just fell in love with it. Who doesn’t love Oreos? I co-opted it for my own dessert, and it never fails!”

To make crust: crush two dozen Oreos and mix with 1/2 cup of butter; press firmly into pan to set, then refrigerate for a half hour or so.

While the crust is setting, make filling.

To make filling: mix 1 brick of cream cheese, 1/2 container of whipped cream, and 1 cup of powdered sugar. When mixed, put on top of the set cookie crust. Refrigerate to set for half an hour. Mix one package of chocolate pudding and place on top of cream cheese mixture.

Let set again, and then top with other 1/2 of the whipped cream and crumbled or whole cookies to decorate.

Hungry yet? With classes almost over, you will have some time to try out a recipe (or two, or three,) and taste some of the deliciousness contained in this article. Happy holidays, and happy cooking!